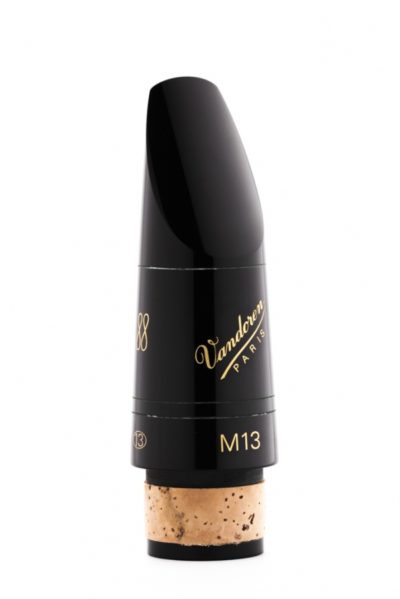 Click the Mouthpiece Chart image below for more information.

Vandoren has developed the new 13 Series mouthpiece specifically for American clarinetists using A440 pitch. Four models have been developed with specific facings to this series: the M13, M13 Lyre, M15 and the M30 mouthpieces. The 13 series range also expands to other models (Profile 88 facings): 5RV, 5RV Lyre, B40, B40 Lyre, B45, M15 and M30

M15 At last, a mouthpiece which enables you to play strong reeds with a great blowing ease. Exceptional sonority. The musician can easily achieve a colorful spectrum of sound.

M13 Lyre A little more open than the M13 mouthpiece, it permits easy blowing with harder reeds and produces a rich and centred sound. The M13 LYRE is recommended for symphonic and chamber music.

M13 Offers many of the characteristics of older American mouthpieces which are so widely sought after. The M13 permits easy blowing with harder reeds and produces a rich, dark, centered sound. Response is particularly sensitive.

M30 for those seeking a more open facing and using slightly softer reeds. Produces a larger sound and requires a little more air to produce the sound.

Muncy Winds Music Was founded in 1987 growing out of Muncy Musical Instrument Repair in Denton, Texas

Get latest updates and offers.

Select the fields to be shown. Others will be hidden. Drag and drop to rearrange the order.
Click outside to hide the compare bar
Compare
Compare ×
Let's Compare! Continue shopping